On the paths of the World war

Daily hiking trips around remains and memorials of the Isonzo front.

In 2007, the outdoor museums and the most important remains and memorials of the Isonzo front in the Upper Soča region were interconnected into the Walk of Peace. It is dedicated to the memory of numerous victims of the First World War. Trekking along the about 100 km long Walk of Peace, or only along a part of it, offers to every visitor an active rest in the wonderful, tranquil, unspoiled nature marked with the river Soča, the world of medium-high and high mountains, flocks of sheep and goats, and still active alpine pastures in summer, and the history of the First World War.

Departure from Podbrdo  (it is also possible to arrange the start at Petrovo Brdo or Soriška planina).

The memorial church of the Holy Spirit. The wooden church was built in November 1916. The church was built in memory of thousands of soldiers who died in the surrounding mountains.  Javorca is the only memorial church of the Austro-Hungarian army in the area of the Isonzo front preserved until today. It was built in eight months on the stone foot above a solemn access staircase. The wooden walls are covered by a shallow saddle roof, which is decorated with a small tower above the entrance. The side facades are decorated with the coats-of-arms of Austrian provinces between the windows. A small bell is hung in front of the entrance, where there is a simple viewing terrace.

THE RIDGE OF KOLOVRAT - day 5

Drive from Kobarid to Idrsko and then uphill to Livek, Livške Ravne and along the ridge of Kolovra to the outdoor museum beneath the point 1114 Na gradu. The Tour is particularly recommended to visitors who have but a short time available for sightseeing and decided to use a car.

The chute on the Tolminka River is the lowest point (180 m) in Triglav National Park and the longest chute in Slovenia. It is also among the deepest. The junction of the gorges of the Tolminka and Zadlaščica rivers with their chutes is a unique phenomenon in Slovenia. The chute of the Tolminka River is about two hundred meters long and five to ten meters wide. The spring of thermal water (22°C) on the bank of the Tolminka just below the end of the trail through the chute is another great rarity in the alpine world. The well known Hudičev most ("Devil's Bridge") over which the Tolmin-Čadrg road passes arches sixty meters above the Tolminka, and above it is the entrance to the Zadlaška or Dante Cave. A triangular rock called the "Bear's Head" (Medvedova glava) after its characteristic shape is wedged in the narrowest part of the Zadlaščica chute. After visit to the gorges, you will have cheese degustation – Cheese Tolminc (the origin cheese made on Tolmin pastures), with bread and apple pie… 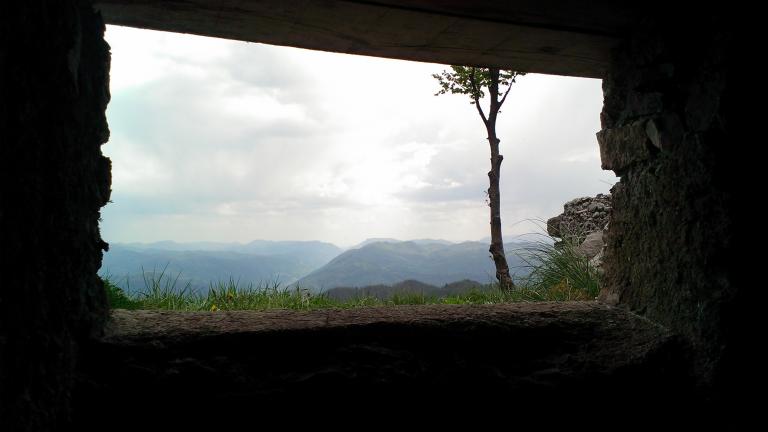